A Singleton DQMH module can have only one instance of its Main.vi running at any given time. Every time the Start Module.vi is called, the same DQMH Main.vi instance is used.

A Cloneable DQMH module can have one or multiple instances of its Main.vi running in parallel. DQMH 3.0 added code for cloneable modules to be executed as singletons. If the cloneable is running as a singleton, the same instance will be returned every time Start Module.vi is called (Module ID = 0). If it is running as a cloneable, the cloneable module assigns a new Module ID number to each new instance that is started when calling the Start Module.vi.

The calling code needs to provide the Module ID as an input to every request and broadcast VI. The event structure inside the EHL in the cloneable DQMH Module Main.vi has to determine if a request event was sent specifically to that clone before enqueuing the message to the MHL. A Module ID value of -1 means that the event was intended for all instances of the cloneable module.

A cloneable DQMH module library has a folder called Multiple Instances; this folder contains the Action Engine that manages the different instances of the module. 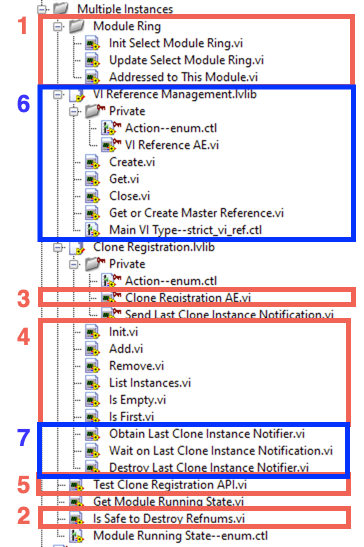 The Clone Registration functionality resides in a library with a Public API, which allows the developer to implement the registry with a different underlying mechanism besides an action engine if she so desires.